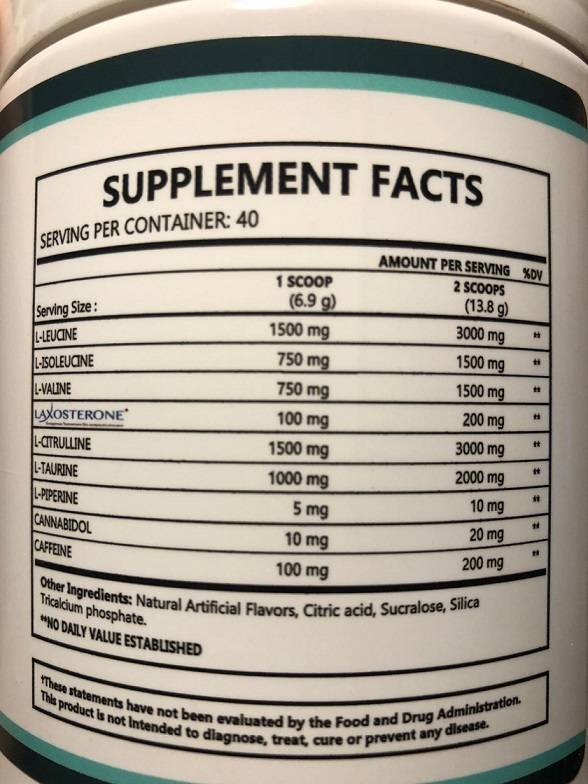 Atlas LAbs Renew RX BCAA with CBD is an extremely effective supplement that can be used as an intra-workout and post-workout, depending on the needs. The preparation prepares the body for high physical exertion, intensifies the building of muscle mass, regenerates and nourishes the muscles, and reduces the feeling of pain.

One of the most effective preparations with such a strong anabolic effect as much as 100 mg of Laxogenin in the patented form of Laxosterone.

The supplement is a combination of laxogenin – a patented extract derived from the Smilax scobinicaulis root, bcaa amino acids and CBD. The preparation perfectly increases training efficiency, promotes concentration, increases motivation to act and increases strength.

Renew Rx is the perfect combination of substances with anti-catabolic properties and increasing blood flow to the muscles. It affects both the effect of the so-called “muscle pump” and increases the nutrition of our muscles during and after training. The supplement with the addition of cannabinoids has antioxidant, anti-inflammatory, analgesic properties, and at the same time reduces the feeling of fatigue, allowing for long and exhausting training sessions without overloading the body.

Laxosterone – a patented extract derived from the Smilax scobinicaulis root (5-alpha-hydroxy-laxogenin). Delivered to the human body, it has anabolic androgenic effects. It manifests anti-catabolic properties by lowering cortisol levels. Thus, it supports the synthesis of muscle tissue proteins and its subsequent protection against degradation. Probably mainly due to the interference in the activity of the thyroid gland, it supports fat loss. Additionally, it has a strong anti-inflammatory effect.

Cannabidiol – is a pain reliever, which means it is effective at relieving pain. This ability to reduce pain sensitivity can help you with tough training sessions as you will not be so sensitive to pain signals from your muscles. Many people also use CBD as an energy and mood generator. CBD has antidepressant and anti-anxiety effects that can help you feel more energized, positive, and motivated to exercise, especially if you suffer from depression or anxiety. Another pre-workout benefit of CBD is that it is anti-catabolic. Research shows that volunteers who received CBD showed lowered blood cortisol levels. This effect can prevent muscle breakdown during training, making it easier for you to gain lean body mass.

L-Citrulline – participates in the synthesis of nitric oxide (NO) and phosphocreatine and the oxygen metabolism of glucose, thereby increasing the uptake of oxygen, glucose, amino acids and creatine and energy production through muscle cells. It reduces the concentration of lactic acid and ammonia in the muscles, allowing the body to recover energy faster by increasing the level of creatine phosphate and re-synthesizing ATP. Citrulline malate is a much more effective form than high doses of arginine, as it is its precursor. At the same dose as arginine, it is more effective in increasing its amount in the body than arginine alone.

L-Taurine – this amino acid increases the endurance of the body and counteracts the symptoms of fatigue, and also improves our concentration. Taurine enables faster and more effective post-workout regeneration. Another important feature of this amino acid is that it reduces the negative effects of stress while we are on reduction and follow a low-carbohydrate diet. Taurine is also anti-catabolic and supports the transport of creatine.

L-Piperine – is certainly one of the best ingredients. The goal of BioPerine is to increase the bioavailability of the other ingredients of the supplement and enable the proper absorption of all of them, so that you can get the best results and make the most of your time in the gym.

L-Leucine – affects the synthesis of skeletal muscles in several ways: it increases the secretion of insulin, a powerful anabolic present in our body, affects the activity of the S6 protein kinase, accelerates the phosphorylation of the eIf4E binding protein and affects the degree of connection between proteins (eIF) 4E and eIF4G. All this, despite the complicated sound and nomenclature, boils down to a very simple theorem – Leucine increases the degree and speed of using proteins to build muscles.

L-Isoleucine – the supply of large amounts of Leucine reduces the level of the other two amino acids: Isoleucine and Valine, so it is important to use all three compounds together. In addition, Isoleucine is classified as glucogenic amino acids, i.e. those that the body can easily and quickly transform into the energy necessary for its functioning. This means that we will not only be able to train longer and more intensively, but also recover faster.

L-Valine – its presence in this combination, owes not only to the aforementioned need to administer all three BCAA amino acids together, but also to reducing central nervous system fatigue. In addition, as in the case of the other two amino acids, it is easily converted into energy used by working muscles and thus allows you to save the glycogen stores stored in the liver.

The Lemon Lime flavor also contains 100 mg of caffeine in one scoop.

1-2 scoops before, during or after training, as needed.